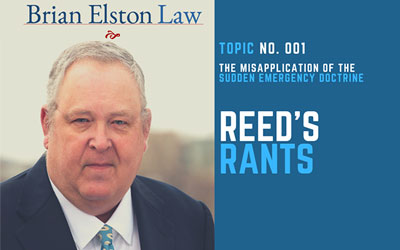 The Misapplication Of The Sudden Emergency Doctrine

THE MISAPPLICATION OF THE SUDDEN EMERGENCY DOCTRINE

THE MISAPPLICATION OF THE
SUDDEN EMERGENCY DOCTRINE.

It seems like there is one household rule that is universal to all families: don’t play ball in the house. When playing ball in the house, it’s only a matter of time before a window breaks, a lamp is knocked off a table, or a picture frame is busted. No matter who threw the ball, or who didn’t catch it, both parties should fix the broken window.

In today’s world, I see “the sudden emergency doctrine” pop up as a response by a defendant, I’m a bit chagrined. Using the baseball-through-the-windowanalogy, defendant’s try and blame the throw or the bad catch as the emergency. However, that “emergency” wouldn’t have happened had they simply followed the rule of no ball in the house.

The Court’s agree. For instance, in Banks v. McGee, 124 N.C. App. 32 (1996) a defendant lost control of her car after hitting a puddle of water. When she hit the water, she started to hydroplane, skidded into another lane and hit plaintiff’s car. The defendant’s plead the doctrine of sudden emergency as a bar to plaintiff’s action. The Court of Appeals disagreed. The Court reasoned that it wasn’t a sudden emergency because the defendant was aware that it was raining and knew that rain puddles on the road she was traveling. The question is now what she saw, but instead what a reasonable person in her situation should have seen. The court has used the same reasoning when defendant’s vehicles have lost control due to hitting a an icy patch of road, when they knew that the snow on the road would turn to ice. (Sobczak v. Vorholt, 181 N.C. App. 629 (2007). In short, the defendants want the doctrine to apply simply if there existed an unanticipated event not created by the negligence of the defendant. However, that application fails to take into account whether or not a defendant should know that an emergency should, or is likely to, occur.

As a personal injury attorney, nothing frustrates me more than to see the misinterpretation of the sudden emergency to get out of paying for the window. It causes all parties more time and expense, instead of just accepting responsibility. – Reed